Where do they come from?

Amish people hail from Switzerland, hence the German dialect, called Pennsylvanian Dutch, they speak as their mother tongue. The Amish church was founded in 1963 in Alsace by Jakob Ammann. The people who followed Ammann were known as Amish.
In the early 18th century, the Amish community was suffering religious persecutions in Europe. Some of them were even burnt at the stake. This led many of them to immigrate to the New World in Pennsylvania.
The founder of the colony of Pennsylvania, William Penn, knew that the Amish people were reputed to be excellent farmers. He offered them lands in his colony and assured them religious freedom and in exchange, the Amish would cultivate the land to provide food and feed the newly arrived settlers.

Where do they live now?

Nowadays, the biggest Amish community still lives in Pennsylvania in the vicinity of the town of Lancaster. In the United States, the area is called ‘The Amish Country’.
Over 300,000 Amish people live in the United States and some 2,000 in Canada.
More and more Amish people have been immigrating to Latin America because of a strong need to cultivate the land. 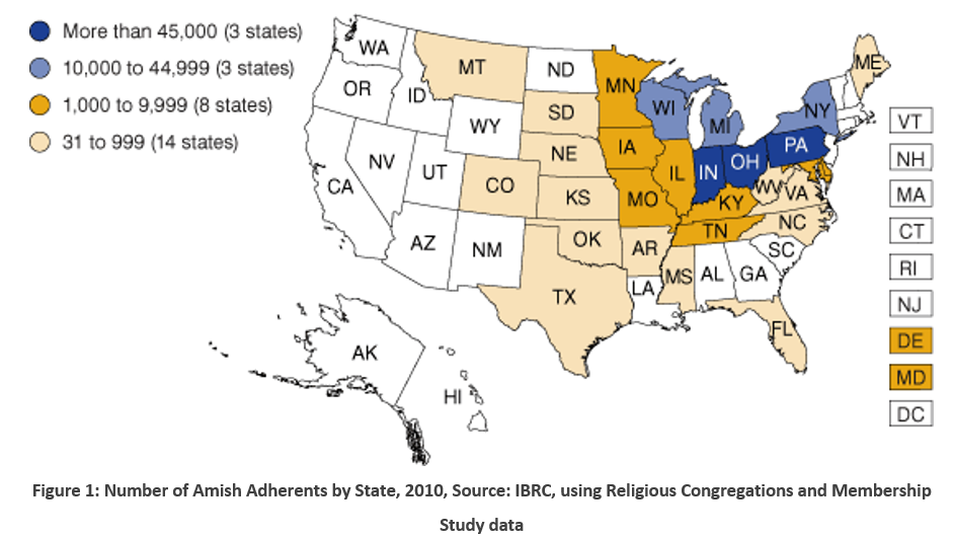 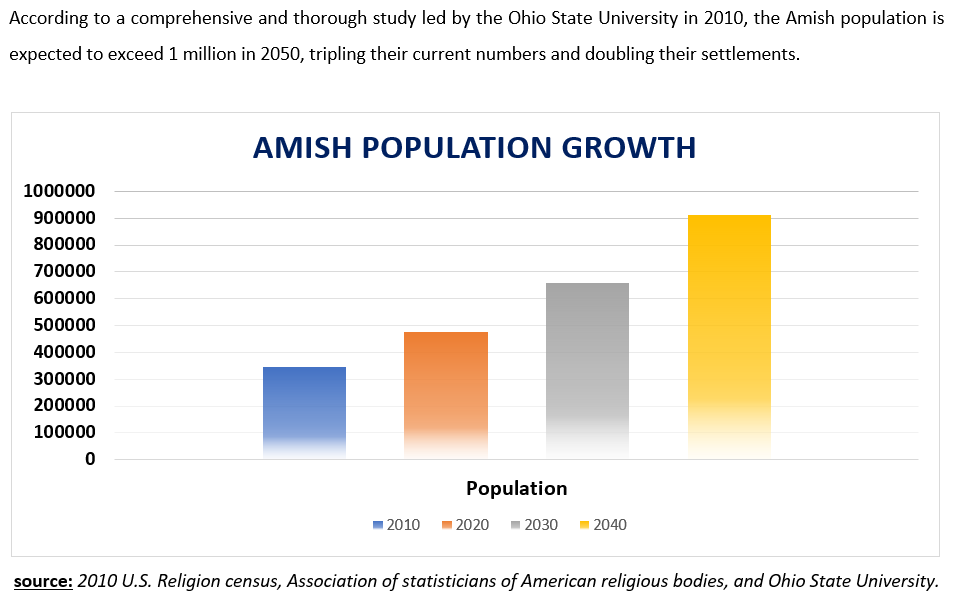 How do you make the distinction between an Amish house from an American/English house?

Amish way of life and beliefs

Religions and modernity
You shall not be part of this world
The Amish way of life is based on the Bible and especially this quotation: “you shall not be part of this world”. This means that they shall focus on their small community and what is around them. They should not care for what is happening ‘in the world’, far from where they live, because many horrible things keep happening “out there”.
This is the reason why the Amish do not own a car. With a car, distances between places are shortened and ‘your world’ is much bigger. With a buggy, their world remains a human-size and a people-oriented one.
Electricity
This also explains why the Amish would not have their houses connected to the public electricity supply. This would bring many negative things which would also make your world much bigger than it should be: TV, radio, the internet.
Furthermore, electricity lines would be going against the Bible, which says that you shall not be "Conformed to the world" (Romans 12:2).
​
This being said, when travelling across the Amish country, one might be astonished to see solar panels installed on their roofs. Indeed, nothing forbids them to generate their own electricity – as long as it is not connected to the national electricity grid. Most of the time, Amish people will produce electricity by using batteries, generators, gas or solar panels.
The Telephone
There is often a little wood cabin in the yard of an Amish house. People are inclined to mistakenly believe that it is a toilet when it is actually a telephone booth. Amish people do not want to have a phone in their houses because they think it is a waste of time. They do not want to be tempted to chat with their friends over the phone about petty things. Plus, they do not want a telephone wire to be connected to their house. This is why the telephone is outside and they would only use it in case of an emergency.
Exceptions
Some Amish people start business and requires the church approval. Near Lancaster in Pennsylvania, a young Amish girl decided to open a restaurant serving traditional Amish cuisine. In order to see through her project, she needed the church to allow her to be connected to public electricity grid. Indeed, the law requires every restaurant to be connected to electricity and running water (hygiene regulation).
Farming
Amish people are known for being excellent farmers. They will usually go into town to sell their harvest to the local population (even non-Amish). Those places are known as “Amish Farmers’ Market” and are very popular in Pennsylvania and the adjoining / bordering states. The two most common crops cultivated by the Amish are corn and tobacco.
Amish farmers do not use modern farming equipment to cultivate the land. Instead of using a tractor, they would rather use an old traditional plough pulled by horses.
Alcohol and Tobacco consomption

Rumspringa (in English: running/jumping/hopping around) is usually defined by dictionaries as “a rite of passage during adolescence which normally begins around the age of 14 to 16 and ends when a youth chooses baptism within the Amish church, or instead leaves the community.” (Wikipedia)

However, this definition varies according to the families and the communities. Like in every other culture, everything depends on the degree of freedom given to teenagers by parents.

The truth is that usually for Rumspringa, teenagers are given their first buggies. This enables them to have more freedom, just like when you pass your driving license and get your first car. The rest, whether they can drink or discover the world, depends on each family and their set of rules.

In popular culture, Rumspringa is often exaggerated. People think of it as a time during adolescence when Amish teens would get intoxicated on a regular basis and do all sorts of forbidden things. This, again, varies from one family to another.

The most striking example of this gross and wild exaggeration of Rumspringa – perhaps mere theatrics - is the reality TV show called Breaking Amish. This series revolves around a bunch of Amish teenagers that are sent to big cities like London to experience their Rumspringa. They are usually shown in parties with other teenagers the same age breaking from the traditional and demanding Amish way of life.

Rumspringa usually ends with the Amish teenager choosing to get baptised within the Amish church, or instead leave the community. Most of the time, Amish people get baptised when they feel ready – usually between 16 and 18 years of age.  Every year, some Amish people (a very small minority) refuse to get baptised and leave their community to live the ‘modern English way of life’.
Contrary to popular belief, these former Amish do stay in touch with their parents and Amish friends. The question is: once you’ve been experiencing the outside modern world, what do you talk about with your Amish friends who chose not to be part of it?  It is thus often difficult to stay in contact.

The Amish community see the imposing and impressive religious buildings (such as cathedrals, churches or mosque) as a waste of money and time. They would rather see this money go to the people belonging to the Amish church than into the construction of a church. As a consequence, there aren’t such buildings in the Amish country and worship services are held every other Sunday in someone’s home.

School
Amish children of a same community, whatever their age, will all attend the same single-room school that includes grades one to eight. Contrary to other schools in America, teachers are not specialists but generalists in subjects. They teach English, Pennsylvanian Dutch, math, and a little bit of Geography and American History. The teachers are usually females (picked for her maternal instinct and her Christian example). There are usually 30-35 pupils. The school is usually within walking distance of home and includes a small baseball field as well as two outside toilets in wood cabins (no running water).
Higher-Education
As mentioned above, children only go to school until the 8th grade. This is why no Amish person (unless they chose not to be baptised and left) will attend university. This is why there aren’t any Amish doctors within the community.
Healthcare
Amish people do not pay taxes nor do they take out private health insurance. Should they go to the hospital – whether it be for prescription medicine or surgical procedure – they would pay for it outright.
Most of the time, if someone need to undergo surgery, the members of the Amish church would club together to pay for it.
Bilingualism
Their mother tongue is a German dialect called Pennsylvanian Dutch. This is the language they will speak at home or with their friends. Even though this dialect differs from German in terms of grammar, vocabulary and pronunciation; Germans and Amish people understand each other.
It is called Dutch because when the Amish population fled from Europe in the 18th century, they stopped in the Netherlands to get on a boat. When they arrived and as the majority of the people on that ship spoke Dutch, Americans automatically assumed that the language the Amish spoke were speaking was Dutch.
Amish children usually begin learning English when they start school at 6.

Outsiders : The English
Amish people refer to non-Amish as “English”, regardless of ethnicity or nationality. Even though you may come from Australia, France or Germany, they would refer to you as ‘English’.
English, for them, means ‘others’, and this is in no way pejorative.

Amish people do sometimes live in the same streets as non-Amish and they cultivate friendly relations. A good example would be the story of this English couple whose house comply burnt down. Their Amish neighbours rebuilt everything (they are known for being excellent carpenters) and covered the construction costs.
Photographs
Amish people do not want to have pictures of themselves. They believe that photographs make you immortal, and as a consequence, turn you into a godlike figure. They think that photographs might also cultivate personal vanity.
This is the reason why there aren’t any family photos in Amish houses. Instead, they would rather decorate they homes with family trees. The people shown as Amish on postcards are usually actors dressed up as members of the Amish community.
Télécharger le cours
Retour aux chapitres de civilisation américaine