When Lennie and George arrive at the ranch, they are scolded [be scolded] by the boss for being late. On the ranch, the boss is depicted as a ruthless [hard and cruel] character who bullies and scapegoats /ˈskeɪpɡəʊt/ the only African-American man on the farm. For example, he uses the term ‘nigger’ which is a very offensive slang word used to refer to a black person.
The ranch is portrayed [shown] as a place that is hostile to minorities and marginalized people [outcast people].
If you are already logged in, please scroll down. | Si vous êtes déjà connecté, veuillez descendre.
This foreshadows [foreshadow something to be a sign of something that will happen in the future] nothing good for George and Lennie since [puisque] the two friends can also be considered as marginalized individuals because of the unusual nature of their relationship.
The boss thinks that George is hiding something and that he is up to something [be up to something = (to) do something mischievous or scheming.]. It is also worth quoting the boss when said ‘Milton. I got my eyes on you’. Furthermore, the boss blames both friends for being late and insists on asking for their full names. Tjis attitude reflects the harsh [cruel, severe and unkind] conditions in which people in dire straits [in a very bad or difficult situation] had to work. ​​ 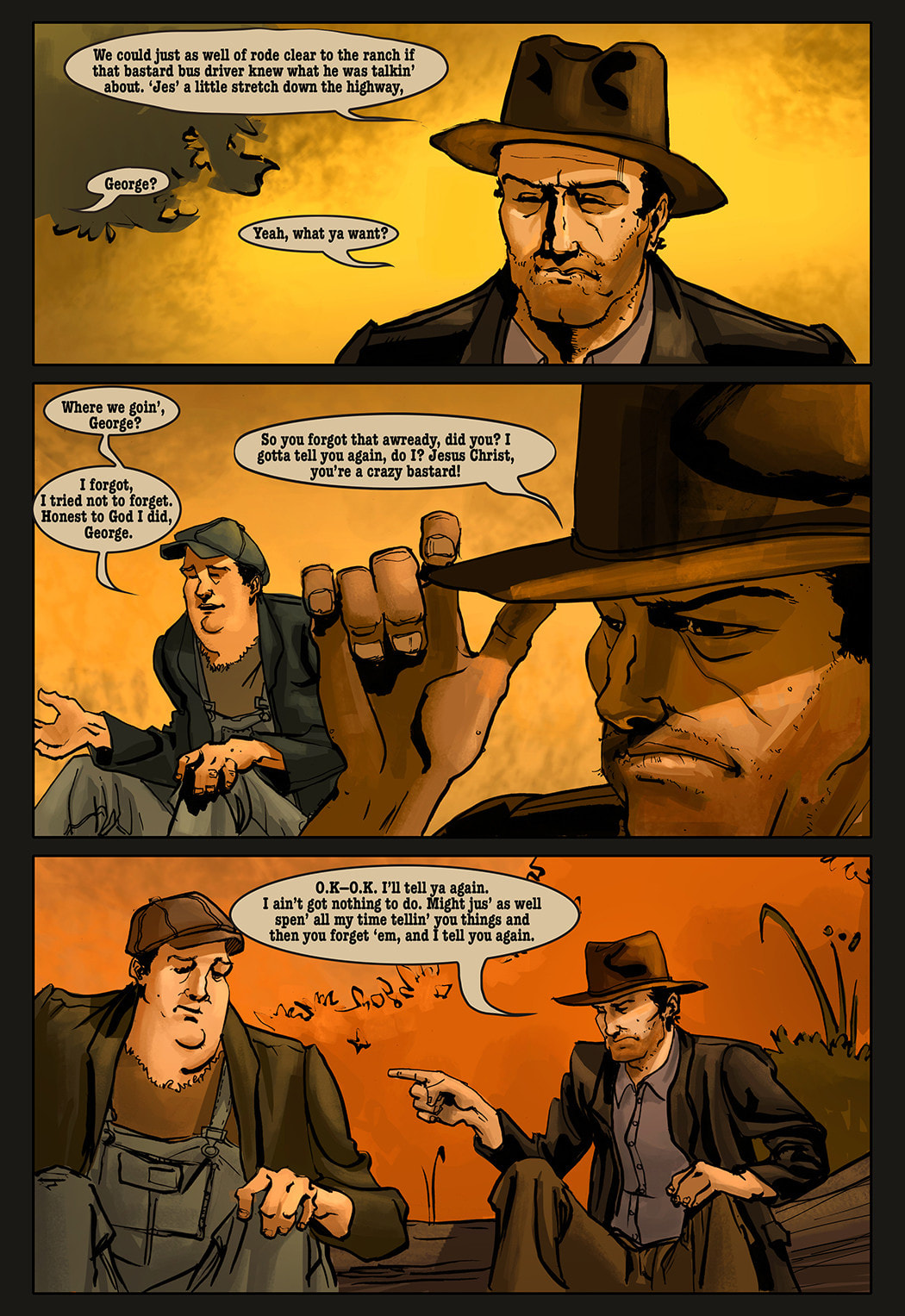 This cartoon is the perfect illustration of the relationship between the two men.
Source: https://steersdrawings.artstation.com/projects/agO9

Conclusion on the ranch

In the novel [roman], the ranch serves as a microcosm /ˈmaɪkrəʊkɒzəm/ [a community, place, or situation regarded as encapsulating in miniature the characteristics of something much larger] of the landscape of the American West during The Great Depression. The ranch represents all the features of 1930s’American West and allows the reader to catch a glimpse of what was life like for minorities at the time.
The ranch is depicted as a heartless /ˈhɑːtləs/ place dominated by tough-skinned white labourers with little regard [avec peu de considération] for the weak or elderly.
Steinbeck portrays here a callous /ˈkæləs/ [not caring about other people’s feelings, pain or problems] society in which African-Americans, women /ˈwɪmɪn/ and disabled people have to endure [to experience and deal with something that is painful or unpleasant without giving up] suffering and repeated [relentless, renewed, systematic] persecution.
Télécharger le cours
Passer à la leçon suivante
Retour aux leçons de littérature
​Analysis (Literature)